You've been sentenced to a lifetime in prison and hard-labour for multiple accounts of piracy. Make ends meet by using the prison mines to sell rarities to the corrupt Prison Warden. Upgrade your tools to make more money in a shorter space of time. Keep your criminal activities going whilst in prison by forming a gang and operating your own personal island.

Paragon MC Prison is designed to be a mix between classic and OP Prison with a unique and themed twist.

Ranks in the prison begin at A and end at Z. Ranking up costs a set amount of money that will increase for every rank. Each rank will give you access to a new mine where a greater quantity of rarer ores will be present along with increased sell prices for the rarities.

Useful Command /rankup If you have the required amount of money, you will be ranked up to the next rank.

When you reach rank Z, you'll be able to reset your progress in return for a little prestige. Your rank will be set back to A and your balance will be cleared. You will keep all of your items, island data, quests progress, and daily mission progress. When you prestige, you will receive a permanent 0.05x sell multiplier and a prestige tag in chat and above your head.

Useful Command /prestige If you have the required amount of money, your progress will be reset and you will gain prestige.

All mines that you have access to are displayed in the mines GUI. When you rank up, the appropriate mine will be displayed as unlocked in the GUI. 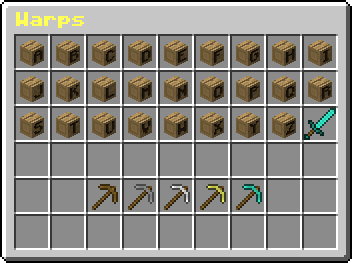 Useful Command /warp Opens the warps GUI to allow you to select a mine to warp to.

Tokens are the second currency in the prison. Tokens can be gained from voting, mining, completing quests, mining 100 blocks, and completing daily missions. You will be able to spend tokens on custom enchantments, sell multipliers, and island upgrades.

When mining, you will come across treasure chests which will spawn randomly in mines. Click the chest to take the booty inside it! Players with donator ranks will receive more valuable booty from treasure chests.

Create a gang of up to six members to complete gang missions to level up your gang. Each time your gang levels up, all gang members will have new levels of custom enchantments unlocked for purchase. You can assign gang ranks to members and control what permissions each gang rank has access to through the permission editor!

Gangs have their own ship which will mine value at sea. Gang members will have to deposit ship fuel in the ship hoppers to enable the ship to mine. Ship fuel can be obtained by mining the regenerating ores in the Outback.

​
Gang members can control other islands to have more control over the sea which will result in their ship mining more value! To warp to an island, visit the Sailing Master NPC on your gang's ship. PvP will be enabled five seconds after you warp. Capture the hill for one minute to control the island.

You can purchase access to pure ore mines through the Mines Merchant at spawn. Access will cost tokens and you will get a period of 30 minutes in the mine! In the 30 minutes, you can come and go from the mine as often as you like. Pure ore mines can help you grind your quests and daily missions. These mines do not offer sell signs.

The Outback is a place where you can grind mobs to gain tokens. When a player is in the Outback, mobs will periodically spawn for the player to kill. We'll be looking into enhancing this area in the future. You can also mine regenerating ores in the Outback which will provide you with fuel for your gang's ship in order for it to mine value at sea.

You can purchase islands where you will be able to store items, operate a quarry, send your pirate ship on treasure hunts, build on your plot, and create your own market. By default, you will have access to the storage area on the island where they will be able to store their items. You will then be able to unlock the different areas of your island through the Island Manager NPC.

You will be able to build in your plot area to create your own part of the island and create more storage.

The quarry area has a quarry that is operated by miner minions that can be individually upgraded. All islands with this area unlocked will have one miner minion operating the quarry, though up to 9 more miner minions can be purchased from the store. Miner minions consume power as they mine. The island's power generator will store power. Upgrades for the power generator can be purchased from the store to allow it to store more power. To keep the power value high, you will need to send your pirate ship on a treasure hunt by giving the Captain a treasure map. 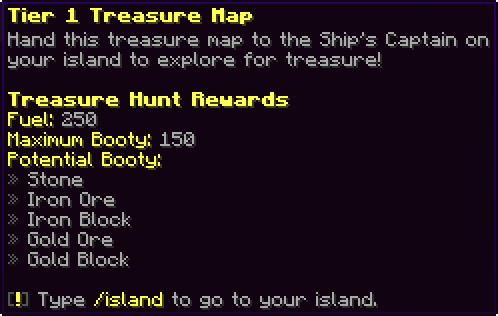 You can upgrade your pirate ship through the Engineer NPC. The length of time that it takes for the ship to return can be reduced by upgrading the time value. Pirate ships have the potential to be attacked by other pirates at sea, so they may return with no booty or fuel. You can upgrade the artillery on the ship to reduce the chance of this happening.

You will receive three missions every day that vary in difficulty. Daily missions do not have to be activated to begin recording progress. When a mission has been completed, you will have to click the mission in the GUI to receive your rewards.

You will have a list of quests that you will be able to complete for cash and token rewards. From mining blocks to winning events, you'll have to complete various types of quests. Some quests will be permanently active and some will have to be activated manually. If a quest requires manual activation, you will have to activate it before any progress is recorded.

There are multiple events that you can get involved in for prizes and to contribute towards quests and daily missions. There are a variety of different events that will periodically take place - some are solo events whilst some are gang-based events.

Useful Command /outpost Warps you to the Jolly Roger.

A special mine will be opened for a short period of time where there are greater quantities of rarer items and increased sell prices. A great way to earn large amounts of money fast!

Useful Command /party Warps you to the Mine Party.

A supply crate will be dropped in the PvP mine for everyone to fight to claim. The supply crate will take 5 minutes to unlock before you can open it to receive the prizes - though you need to escape the PvP area with the loot!

Saturday All Day
For the whole day, any tokens that you receive will be doubled. A great opportunity to grind at the Outback to stock up tokens!

Mob bosses spawn at the /outback for all players to kill! Damage is recorded and the three players who deal the most damage to the boss will be rewarded. All other players who have partaken in the event will receive a participation reward. 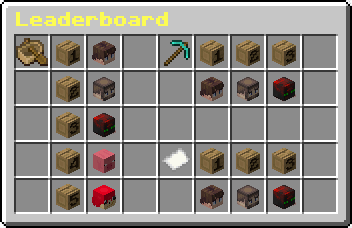 Gang value is generated by your gang's ship. You will need to keep your ship powered to continue generating value. You can visit the Sailing Master to warp to islands that you can capture to gain more control of the sea to allow your gang's ship to generate more value.

Gang value is not reset every week, but the leaderboard will only display any progress the gang has made since the last consolidation and this value is what the next consolidation will be based on.

Any blocks that you break inside a mine will be counted. You will be able to see a total of how many blocks you have mined on the scoreboard. This value is reset every week when the leaderboard is consolidated.

When you rank up and prestige, the amount of money that you spend is accumulated. You will be able to see your total progress made on the scoreboard. This value is reset every week when the leaderboard is consolidated.